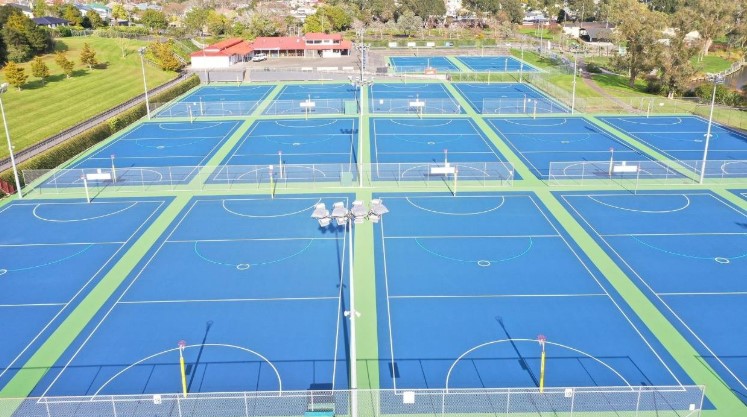 With the winter netball season now underway, the netball community has finally been able to enjoy the new courts at Hamilton’s home of netball – Minogue Park in Forest Lake.

All 21 courts onsite have been resurfaced with a Rebound Ace rubberised sports surface, that was completed just in time for the start of the season.

The upgrade work brings the facility up to Netball NZ’s high standards and is a first for the region.

The first Saturday of the season, June 27, saw many delighted faces as players took to the courts for the first time. Comments such as “the courts are great to play on and the change rooms – what a huge difference” and “loving the new courts, no more slipping and sliding” were among the positive feedback received by the netball community.

The resurfacing work began in January and was due to be completed late March. Delays due to COVID-19 saw the project put on hold and it was unsure whether all courts would get completed this year. However, with work able to commence again in May, during Alert Level 2, the project was seen through to completion.

Maria Barrie, Hamilton City Council’s Parks and Recreation Manager, is proud of all those involved in the project.

“Following such unprecedented times, it is a huge achievement by all those involved to see this work through and to have it completed in time for the start of the season.”

“This highly anticipated project has produced an excellent result for our community due to a partnership approach between the Council, the Hamilton City Netball Centre and Trust Waikato. It is fantastic to see the netball community now able to enjoy these high-quality facilities, particularly after two years of planning and discussions,” she says.

To supplement the improvements to the courts, work was also done to improve the netball centre building facilities. This included refurbishment of the toilets, changing rooms and storage.

Clare Frankhouser, Hamilton City Netball Centre Manager, is excited for the season ahead.

“We have been through a whirlwind of a year, but our Hamilton City Netball Centre has stayed strong and we have come back with a bang. New courts, new toilets and new meeting spaces!  Best of all, is seeing all the smiling faces enjoying being back playing the game we love. This would not have been possible without the huge support from Trust Waikato and Hamilton City Council,” she says.