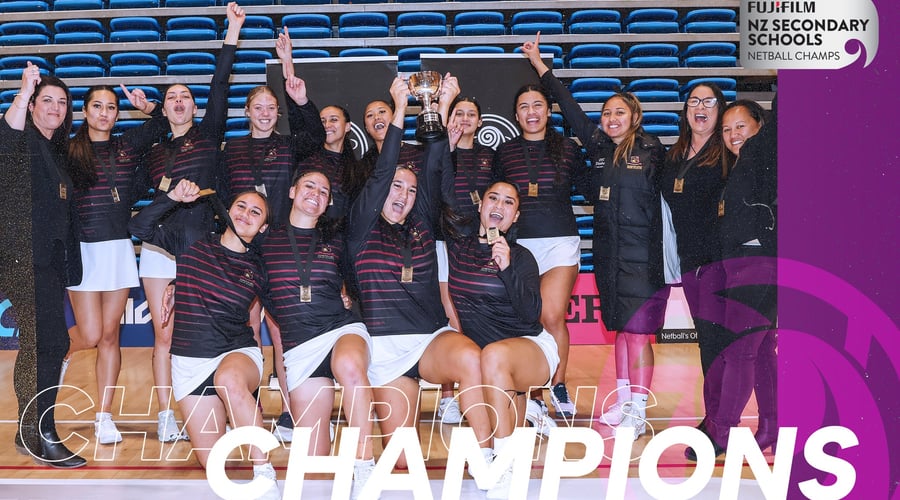 Hamilton Girls High School has won this year's NZ Secondary Schools Netball Champs in Porirua, the first held since 2019 because of Covid-19.  This win follows their 1st placing at UNISS in 2022.

To get to the final HGHS, in the initial pool play, had wins over St Peter's School, St Hilda's Collegiate School and St Mary's College, Wellington.

In the next round of pool play, they had wins over Columba College and Howick College. They then met St Margaret's College in the final.

They led the final from start to finish and won the game 33 to 24 points. A great effort from the team both on attack and defence.

The FUJIFILM Business Innovation NZ Secondary Schools Netball Champs win was history-making for the school as it is the first time, they have won the competition. It is the final feather in their cap for a team that has worked hard all season.

It has been an outstanding season for the Hamilton Girls High School team placing 3rd in the local premier competition and recently winning the Upper North Island Secondary Schools competition.

An emotional Hamilton Girls High coach Kim Howard said after the game: "This is significant for us. For me personally, the school brought me in as a director of netball to put Hamilton Girls High on the map, and it's been a collective effort with the girls that have put in the work and all of us behind the scenes."

Congratulations also to St Peter's School Cambridge who placed 5th overall. They were the previous winners in 2019. There were 16 teams in the champs this year based on results from the recent Upper North Island, Lower North Island and South Island Secondary School competitions.

Overall, another highly successful result for all teams and something that the Hamilton Girls High School and Hamilton City Netball Centre can be immensely proud of. This is another great event with a large team of volunteers including coaches, managers and umpires attending.