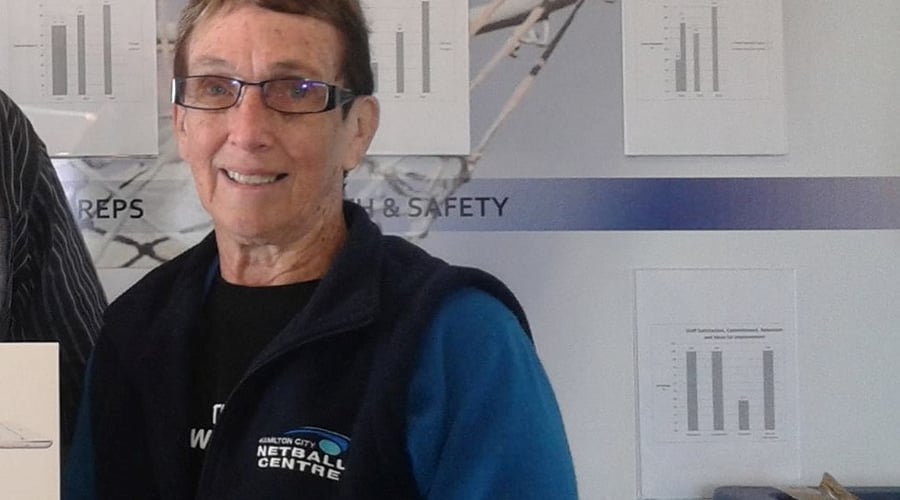 We couldn’t be prouder to announce that our very own Hamilton City Netball Centre Life Member Kathleen Farrell has been awarded a Service Award by Waikato Bay of Plenty Netball at the recent AGM.  One Waikato Bay of Plenty Netball staff member described Kath as truly a pioneer in netball. In writing this we were going to do a brief summary of what Kath has done, but when you read through her nomination form, it becomes obvious that a brief summary just isn’t going to do it! So below you will find the full nomination and details of Kath’s contribution so far to netball.

Kathleen Farrell is the sort of person every Netball Centre wants and needs.  She has served Waikato Region, Magic Franchise and Hamilton City diligently in her many years of service to Netball.  She has been a pioneer through the years as Netball has evolved and has helped grow the Hamilton City Netball Centre as it is seen today. Kathleen has worked in accountancy where her administration and hardworking approach has made any committee/organisation she has been involved in find her ‘very highly regarded’ because of her knowledge and work ethic.

Kathleen has always been about the nettie/volunteer whether it being Primary/Secondary, Club, committees.  She has always been about making it accessible and easy for people to play our game, coach, manage, umpire, volunteer.  There would not be many people who would not know Kathleen Farrell, her name is well known throughout the netball world from Grassroots level through to International level.  Once Kathleen stopped playing netball she was instrumental in setting up Coach and Umpire committees and organised midweek and Saturday netball. One of Kath’s highlights was the ‘Netball No limits’ programme she organised at Minogue Park for people with disabilities to be able to play netball.  Midweek netball which was hugely popular and she was instrumental in setting this up and running each year.  There has been no role that Kathleen has not undertaken throughout all her many years of her time from being at the Cobham Drive Netball Courts, Hamilton then moving to where Hamilton City Netball Centre is today at Minogue Park Netball Courts.

Kathleen in her time involved with netball, has helped many netballers.  Her work in netball circles is well known.  She is always prepared to help and very happy to share and support fellow netball volunteers.  Throughout the years she has worked alongside Monica Leggat and has been instrumental in working through the disestablishment of Region to now Centres and Zones.  The Waikato Region had a lot of Netball Associations and bringing them all together to formally become the Waikato Region took a long period of time (there are but a few of these people sitting on Centre boards now). In her time the Waikato Region was one of the leading Region’s in New Zealand.  When Trust Waikato was a huge sponsor of Netball Waikato they gave the Region money so that Centres could apply for grant funding directly to Netball Waikato and then they paid the Centres.  Kathleen was on the working party for this and they met and paid out to Centres who would normally not be able to receive money.  At the end of the financial year she would document all the grants and forward back to Trust Waikato.  This was an arrangement that worked very well between both organisations.  As the Waikato Region was a big area and had 18 associations when it came time to form the Waikato Region Kathleen was part of the working group that met very regularly to transition this process.  It was a difficult time for Waikato Region (which was formally where Hamilton City is today) and getting associations to not only move to Centres but to believe that they would not lose their identities.

Kathleen started playing netball in 1949 and we can honestly say that she has done everything from playing with school teams, representative teams as a player; umpired, managed and coached school and representative teams.  She was certainly a stellar player in her day and wore the tartan skirt of Waikato for a number of years and dictated the Centre court area.

Kathleen’s volunteer time would see her down on the courts mixing and mingling with people coming to the netball centre where she would be seen taking out goal post pads, making sure teams did their duties, picking up rubbish, sweeping the courts, making sure that each netball day run smoothly and then organise and delegate volunteers to different roles giving them all her guidance and support.  Kathleen has been ably supported by her husband Jack who looked after the sponsorship of Hamilton City Netball Centre and supported Kathleen.

Kathleen Farrell is a very humble but worthy recipient of this award and would quite openly say she did not deserve the recognition.  However, when you sit down and read her history you realise what an amazing and valuable person she is and the huge contribution she has made to Netball over a very long time.

Kathleen would be one of the last volunteers to not receive payment for all her years of service to netball.